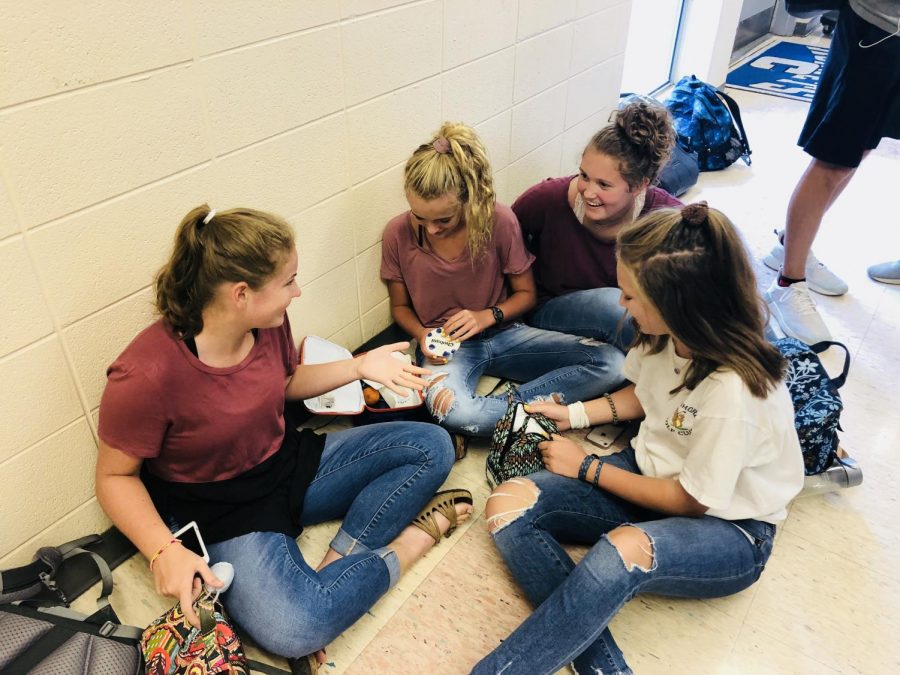 Students, Kathryn Moore, Avery Burleson, Jillian Francis, and Maddie Larkin laugh and talk while eating their lunch in the halls.

Following the start of the coronavirus outbreak, schools closed nationally in the United States but many have chosen to reopen under new rules this fall. Districts may choose to reopen schools based on state-provided guidance, though as of October, seven states have required closings for certain grade levels.

The public health association has recommended new guidelines for Alabama to incorporate into reopening plans. Chelsea High School has implemented mandatory masks and social distancing in classrooms and during lunch and halftime so lunch and halftime for students looks much different than it has in previous years.
———————-
What changes have impacted students the most?

I interviewed Wheel McDaniel, a sophomore student at Chelsea High School on his opinions of the new rules during halftime.

He said, “the biggest change for me is not being allowed into teachers’ classrooms to eat lunch because I used to eat with my friends in a classroom last year.”

“I don’t like that the administration won’t let us walk around or move between halls and classes like we could before and it’s more difficult to go talk to other people or go to classrooms to make up work I missed.”

Wheel also discussed how our lead class or advisory has been changed this year and how he does not like having to go to lead everyday because it cuts lunchtime in half and the lead classes are grouped with new people.
———————-
Do students like or dislike the new halftime rules?

I chose to ask Natalie Nguyen, who is also a junior at Chelsea, how she feels about the differences of halftime this year.

She said, “My friends and I personally do not like the new halftime rules and from talking to some of the other students I think most people dislike the new changes and would like halftime to return to how it was before.”

She dislikes the fact that the teachers and staff have taken away freedom that was enjoyed by most of the student body at Chelsea high school.

Natalie said, “It’s annoying that we’re being monitored and that we have to stay in one spot for the whole time.”
———————-
How have the new rules impacted teachers?

Halftime this year has impacted people beyond just the student body so I interviewed Mr. Boyer, a chemistry teacher at the school, to learn how the new rules of halftime have also impacted teachers.

Boyer said, “Most of us teachers have not been impacted by the changes as much as the students have because most of our halftime is the same except lead, but my lead class does not interfere with my grading or being able to catch up on work during the break.”

He also said that he still has the same halftime duties and most of halftime is the same as it was last year for teachers; the only new rule that affects him is students having to eat in specific parts of the hall because he misses being able to have students eat lunch in his room.